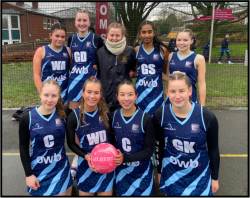 On Sunday 26 January, nine students from year 10, 11 and 12 headed to Bromsgrove school for the U19 regional netball competition which we qualified for by coming 2nd in the county school’s competition. It was an early start from school at 7am and took an hour to get to Bromsgrove on the school minibus. Once registered, we had some warm-up time on the courts which was a great start to the morning. We then had a long wait till our first match which was at 10:20 which was against Hereford 6th form. This was a good match to start with and the team fought well however we unfortunately lost 6-7. Next, we played Bishop Vesey, and again this was a very tight match, and unfortunately, we lost by one goal again with the final score being 8-9. After this, we played Worcester this was our toughest match of the day with the final score being 13-3. However, the team played well and kept calm throughout the match. Our fourth match of the day was against Rugby school, the first half was very close with the half time score being 2-1 to Rugby however, in the second half had a good rhythm and the final score was 6-1. The fifth match of the day was against St Josephs the team’s spirit was still on form and we went in positive to this match. Again, it was a close match, but the final score was unfortunately 8-6 to St Josephs. Finally, we had the last match of the day against Wolverhampton Girls’ high, the rain had been light but persistent all day, but we kept spirits high for a final match! As the match started, so did the heaviest rain we had seen all day and the teams both played well in the conditions and the half time score was 3-3. With it all to play for in the final 7 minutes of netball that day, the second half started. It was a tough match, but we got into a great rhythm as a team and the match ended on a 11-4 win for us! It was a lovely way to end the day and showed our teams persistence throughout the matches and weather conditions.

To finish off the day the girls travelling back on the minibus got to stop off at McDonald’s and were treated by Mr Scott, which were all very grateful for and was definitely one of the highlights of the day along with our winning match! We would finally all like to thank Miss Clarke and Mr Scott for giving up their Sunday to accompany us to the tournament and we also wish Mrs Goodall a speedy recovery and thank her for all her organisation prior to the tournament!     H Davis (Y12)