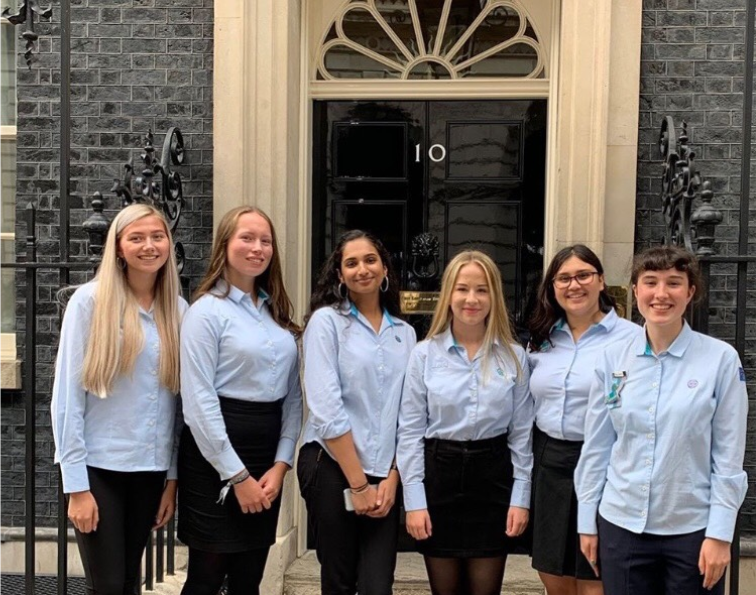 During the summer holiday, one of our Year 13 students enjoyed a unique opportunity to visit Downing Street as a Girl Guiding Advocate. Read more about her story below:

Over the summer I was fortunate to have the opportunity to attend a Downing Street reception with five other Girlguiding Advocates. Prime Minister Johnson made clear that he believed Girls Education to be the most important factor to solving the world’s problems, which was fantastic to hear.

Our conversation was firstly about our research, so I (being interested in computing) told him that in 2009 19% of girls 7-10 liked computer science, but last year it rose to 45%. The other girls highlighted how young people had said the most important thing they wanted to happen was for environmental issues to be taken seriously be the government, and that the cabinet should be a leading force in setting standards for combatting plastics and global warming.

Mr Johnson told us that the new government either burnt plastic and recycling or shipped it off, and that he wanted to fix this as well as reducing plastic usage in Britain. (“When I was a nipper, we didn’t have plastic”). He also said that as Mayor of London he put a lot of funding into youth organisations such as Guides, Cadets and other groups, and that he wanted this to be continued.

In his speech, he said that he considered girls education to be the “Swiss army knife” for the world’s problems, and highlighted how in many countries he’d been to there was little literacy or education. He said his main point at the UN conference would be to secure girls twelve years of education. He also went on to say that if you looked at the line up of G7 and the UN conference, they are both full of white men in suits like him, showing how “men in suits hold the power” still in the world, and he believed that as Prime Minister he should make sure the others realise that women’s education should be their focus.