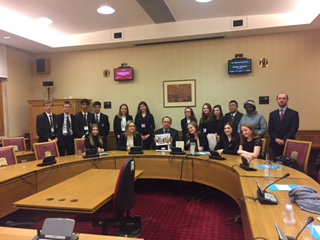 Year 12 history students have recently led the way in showing how we can use the power of words to change the world for the better. A group of eleven students have collaborated with students from Hampton School to produce a digital textbook entitled ‘Genocide: Know more’. The textbook, which is free to download, aims to provide an introduction to some of the genocides that have taken place in the twentieth and twenty-first centuries. It also shares the personal stories of four genocide survivors: Ruth Barnett, a Holocaust survivor; Kemal Pervanic, a survivor of the Bosnian genocide; Sokphal Din, a survivor of the Cambodian genocide and Sophie Masereka, a survivor of the Rwandan genocide. The book has received wide acclaim since its release and will be used as a teaching tool in many schools and educational institutions across Europe and the USA. We hope that by raising awareness of certain patterns in the causes and course of genocide we will help to make genocide easier to stop in the future. 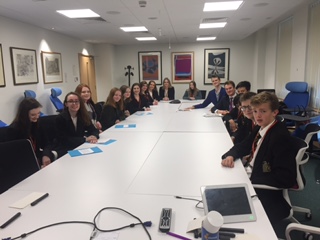 Alongside their involvement in researching and writing the book, ten students also traveled to London to present the e-book to several influential people. They met with representatives from the Imperial War Museum, the Holocaust Memorial Fund team at the Cabinet Office and finally spoke to Lord Bourne in his Westminster Office alongside the four genocide survivors whose stories are featured in the book. They spoke eloquently and persuasively about the need to educate about genocide and to ensure that governments and institutions act to prevent such atrocities in the future.

We will be building on this work this term through the creation of a genocide and human rights awareness group who will be working with Hampton School to contact seventy influential people in the UK in order and young people in seventy countries across the world in order to commemorate the seventieth anniversary of the genocide convention. Year twelve students are also taking part in the Lessons from Auschwitz project and Remembering Srebrenica’s Young Leaders in Schools Programmes, and both groups will be sharing their experiences and learning with their peers in school.

Please do have a look at the book and help our students to achieve their aim of raising awareness. It can be found HERE. To learn more about our work, follow @nghs_history.

Perhaps the final word should go to historian, Dan Snow who wrote the foreword to the students’ book:

History is a warning. We study it because it tells us about what we humans are capable of and allows us to absorb lessons without having to experience the horrors of violence, famine or economic upheaval first hand. If we understand these things, we perhaps have a slightly greater chance of avoiding the mistakes of our forebears. There is no bigger lesson from history than genocide. The young authors have created something remarkable. Their energy and commitment is an inspiration. They do not want to let the memory of genocide fade because they know that awareness is part of prevention. They have run workshops for young people from diverse backgrounds, they have recorded the memories of some of the people who now live in the UK but who were caught up in genocidal spasms from Europe to Africa and Asia, and now they have written this book. It is a huge achievement. These young people have reminded the rest of us of the true purpose of history. We must remember, because when we forget, we repeat.